I just finished teaching my first businesss ethics philosophy course. The Oxford textbook was fairly good but one subject it did not cover was apologies. What do we do, as professionals, when we do fail to be ethical? This post offers a brief answer to that question.

There are four equally important steps in a sincere, gracious apology. They are:

Name exactly what you did wrong, and claim it.

Express sorrow for your decision to do wrong, for your action.

Express your understanding of how your decision impacted others, how they felt or must feel, and how they must be disappointed.

Resolve to make it right, or – if amends are not possible – resolve to work toward not doing this particular wrong again.

To apologize he might say: “Carrie, I’m so sorry I was late again; I lost track of time and should have checked my watch. It must have been frustrating waiting for me yet again. I’m going to be 15 minutes early next time.”

What about the Fauxpology? How do you avoid the “Sorry not sorry” apology?

To make your apology sincere and successful, make each step separate and clear.

Don’t mix up or conflate the four steps. For example, saying “I’m sorry” could be taken as expressing contrition and/or admitting wrong. However, it happens all the time that one uses “I’m sorry” to expression compassion or empathy (e.g., “I’m sorry you were offended.”)

An example from business ethics is when AT&T back tracked away from a tacky tweet.

AT&T first posted this image on 9/11 as a tribute that tied in brand interaction: 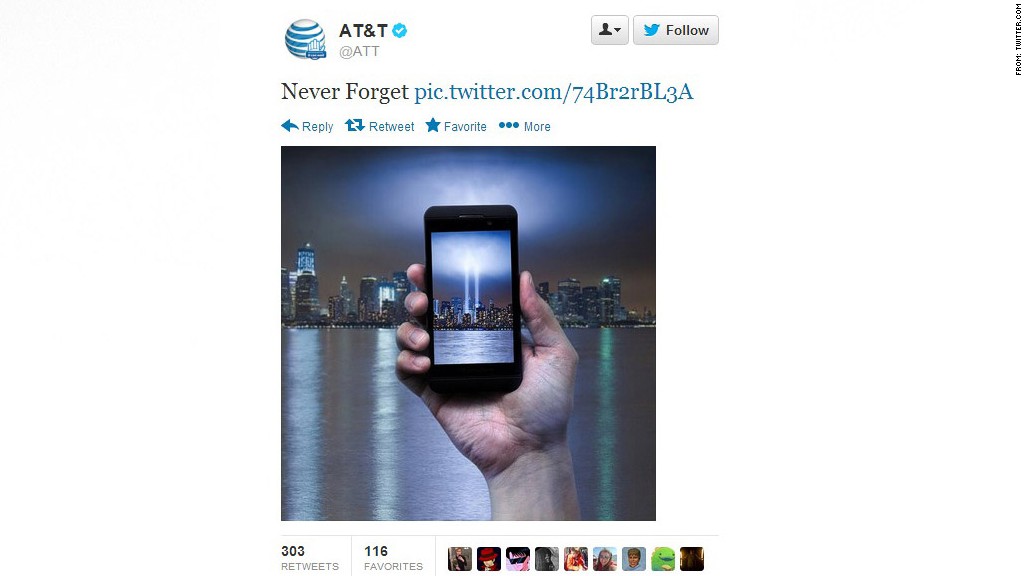 The tweet, which AT&T posted at 12:15 p.m. ET Wednesday, quickly went viral. Some Twitter users replied with expletives, while others called it “tacky,” “disgusting” and “tasteless.” Others threatened to switch carriers.

The tweet was up for only an hour before AT&T deleted it and posted an apology.

“We apologize to anyone who felt our post was in poor taste,” AT&T said in the second tweet. “The image was solely meant to pay respect to those affected by the 9/11 tragedy.”

AT&T didn’t immediately respond to a request for comment.

The apology wasn’t enough to quell angry Twitter users, some of whom considered AT&T’s mea-culpa to be tone-deaf.

“The apology is somehow more insulting,” one wrote. Another called the attempt a “fauxpology.”

The reason people were rightly insulted by AT&T’s apology is that AT&T did not offer an apology. They were simply responding to the pressure from custumors. They said “we apologize” but immediately clarified that the image was “meant to pay respect”. In other words, sorry not sorry.

What AT&T would have said if they really believed they had been wrong was to name and admit the wrong: e.g., “We tried to tie our brand to a national tragedy. That was tacky and soul-less.”

Another business ethics example is from Tony Hayward, the president of BP. He famously “apologized” for the Gulf Spill of 2010.

See if you can notice what’s missing from his otherwise nice statement:

The Gulf spill is a tragedy that never should have happened. BP has taken full responsibility for cleaning up the spill in the Gulf, we’ve helped organize the largest environmental response in this country’s history. More than 2 million feet of boom, 30 planes and over 1,300 boats are working to protect the shoreline. Where oil reaches the shore, thousands of people are ready to clean it up. We will honor all legitimate claims. And our cleanup efforts will not come at any cost to taxpayers. To those affected and your families, I am deeply sorry. The Gulf is home for thousands of BP’s employees and we all feel the impact. To all the volunteers and for the strong support of the government, thank you. We know it is our responsibility to keep you informed. And do everything we can so this never happens again. We will get this done. We will make this right.

Notice what is missing from Hayward’s apology?

Step 3 gets a heartfelt sentence; Step 4 consumes most of the oxygen in this “apology.” But when you listen for Steps 1 and 2 you only hear crickets.

Hayward carefully avoids admitting BP did anything wrong. From this statement, all one hears is that the Gulf Spill is a “tragedy” (which could mean chance or fate is to blame, not BP). A tragedy is not a crime; a tragedy is not a sin. Carelessness is a sin; negligence is a crime. Is BP admitting either of these? Not here.

Even in a court of law, judges and juries are more lenient on lawbreakers who know that they did something wrong, feel bad for it, feel sorrow for the affected, and who have resolved to change. Consult your lawyer before admitting guilt in writing; but consider that it might be better to come out with it.