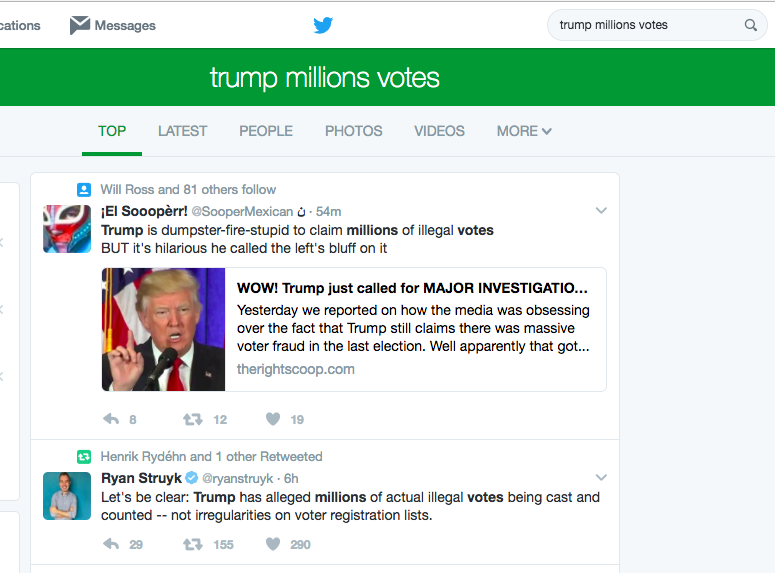 A few weeks ago, Donald Trump tweeted that he would have won the popular vote if not for “millions” of votes from illegal immigrants.

In addition to winning the Electoral College in a landslide, I won the popular vote if you deduct the millions of people who voted illegally

At the time, Trump did not cite any source, but he was likely referring to True the Vote’s research. True the Vote was reported by Greg Phillips on Twitter and by Paul Joseph Watson at InfoWars.

Now, he’s said something similar (again), launching a “major investigation” into possible voter fraud. Predictably, the media are exploding (again) over this claim.

I will be asking for a major investigation into VOTER FRAUD, including those registered to vote in two states, those who are illegal and....

Is it true or false that 3+ million people who are not US Citizens voted?

This post attempts to tease out this claim and the approach to “fact-checking” it.

What is the question?

We have to tease out three different questions:

It might be possible that some people voted illegally and some illegal immigrants or undocumented citizens voted but not enough to give Trump the popular vote win he so obviously craves. Even hundreds of thousands of illegal votes would have him losing the popular vote by millions.

Still, we can’t simply ignore voter fraud if it exists to the tune of hundreds of thousands of votes.

Part of the confusion surrounding this conversation is a confusion between a thesis and a hypothesis. Let’s see if we can get clear.

Jake Tapper and dozens of others in the media promptly reported that there was “zero evidence” for the truth of Trump’s claim. This conflates a hypothesis with a thesis.

A hypothesis is an explanation not a deduction. Technically, “If A then B. B. therefore A.” is an invalid argument form (called affirming the consequent). In practice, however, it is abductive reasoning. Abduction explains a fact (B) with a hypothesis (A).

In other words, a hypothesis is a guess that calls for the collection of and examination of evidence or proof.

Contrast this with a thesis which is already supported or proven by the evidence. A thesis is a claim already proven by factual premises.

A hypothesis is put forward to explain some facts. Only after it is posited do we amass evidence for it.

Of course, not all hypotheses are created equal. A hypothesis is reasonable if it is likely true or if there is even a remote possibility of it being true. For example, anyone could hypothesize that there are foreign governments interfering with our democratic process.

That is only a reasonable hypothesis if certain known facts can be brought to bear that show the hypothesis is likely enough to deserve investigation.

Anyone could hypothesize that there are more planets in our solar system than the currently accepted planets. That is only reasonable if we could also bring to bear considerations that it is possible that a planet-sized object has escaped detection for hundreds of years of modern astronomical observation. By contrast, a thesis would be the claim that there are exactly 8 planets in our solar system. The evidence for this claim is the body of observation and research about Mercury, Venus, Earth, Mars, Jupiter, Saturn, Uranus, and Neptune.

An article from Spectator provides an example:

Last month, [Pope Francis] told the media to stop spreading fake stories because ‘people have a tendency towards the sickness of coprophagia’. Which means eating excrement. Why did he say it? The traditionalist blog Rorate Caeli suggested that ‘ageing or an underlying medical issue’ was responsible for his ‘persistent anger, rancour, vituperation, use of uncouth words (which is known to be increasingly frequent in private)’. Again, this is an opponent speaking. There is no evidence that the Pope is mentally ill. However, plenty of Vatican employees will testify to his outbursts of temper, rudeness towards subordinates and vulgar language.

A more relevant example is this: “Russia interfered with our election process” is a hypothesis. It has not been proven, and there is not enough evidence to confirm it.

If “Russia interfered with our election process” were a thesis, then you should be able to cite the evidence.

Is it a reasonable hypothesis to suppose that “Russia interfered with our election”? There are facts that lend it support. In this case:

Evidence would be some sort of proof that the hypothesis “Russia interfered with our democratic process” either directly or through the release of Wikileaks information.

Is Illegal Voting a Good Hypothesis?

To return to Trump’s claim that Hillary got “millions” of votes from non-citizens. Is it a reasonable hypothesis that illegals determined Hillary Clinton’s popular victory – or the size of her popular victory?

Despite this indeterminacy, many are mocking Trump for spreading a known falsehood.

For example, PolitiFact speaks out of both sides of its left-leaning mouth. First, it admits that we don’t know; then it jumps to the conclusion that we know:

Phillips would not provide any additional information when asked by PolitiFact. He said he has chosen not to release more information because he is still working on analyzing the data and verifying its accuracy. Phillips would also not say what the data is or where it came from, or what methodology he used.

Instead of rating this claim “unproven”, though, they rate it “false.”

If Phillips does release a more detailed report, we will consider that information. But for now, this claim is inaccurate. We rate it False.

To say that, “For now this claim is inaccurate” is almost laughably stupid. That would be like saying, “Suppose that Russia hacked our election. There is no evidence to confirm the hypothesis yet, so ‘for now’ it’s inaccurate.” Claims are not “inaccurate” until proven true, they are simply (unconfirmed) hypotheses.

According to Politifact, the Department of Homeland Security and Office of Director of National Intelligence are “confident” that the Russian government “directed the recent compromises” of emails. That report is three paragraphs released October 7, 2016. It states that the hacked e-mail releases are “consistent with the methods and motivations of Russian-directed efforts.” In other words, they point out that Russian interference is a reasonable hypothesis that has not been proven.

There is still no proof to confirm the hypothesis that Russia’s interference affected our election. Likewise, there is no proof that illegals voted by the millions. Both are, however, reasonable hypotheses.

John Ziegler at Mediate conducts the exact sort of investigation of the hypothesis that I think is called for. He takes the hypothesis (that millions of illegals voted, or that millions of people voted illegally) seriously enough to work out the math and concludes that there is enough information to disconfirm it.

Robert Barns at Law Newz argues that the evidence confirms “a large number” of unqualified persons did in fact vote. Notice that he is not claiming that there is enough fraud to account for “3-5 million” and thus to soothe Trump’s sore ego about losing the popular vote.

So is it true or false that 3+ million people who are not US Citizens voted? Barns concludes that the claim merits further investigation. Maybe even “a major investigation.”