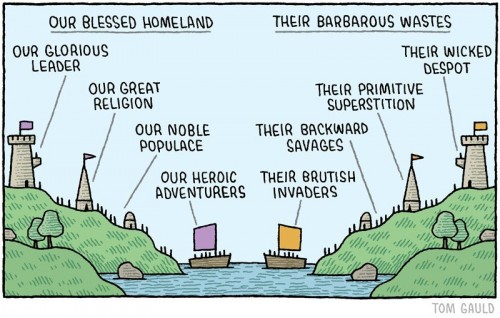 Are you getting just one side of the story?

Even if you get your news anywhere online, you might be doing it wrong. It’s not that every news media source is “biased” in some vicious way. It’s just that everyone has an angle. But with a critical eye, you can read the news well and get both sides of every story.

The veneer of objectivity may have sold well in newspapers and early in the Television Age. It doesn’t sell well in the Internet Age.

The reason is that there are (at least) two kinds of bias. One is intentional, wilful, and intellectually dishonest. This is the kind of bias you see produced by explicit propaganda machines.

The other kind of “bias” is unintentional, accidental, and can even be intellectually honest. You can quibble with my calling it “bias” – it is a certain kind of spin that can’t be avoided.

In this post, I explain 3 kinds of bias you can’t avoid, and 2 strategies for overcoming them by regularly reading from 4 news categories.

3 kinds of bias you can’t avoid

No matter how you present a story, there are three choices you have to make: you have to express the story in certain words and not others; you have to frame the story with a beginning and end; and you have to select which story to tell in the first place.

These are the three kinds of bias you can’t avoid.

For example, here are two ways to tell the story of 9/11 WITHOUT LYING.

Which is right? #2 is right, but you can’t fully understand the truth if you only know one side of the story before you judge. (There is some truth to the idea of “blowback”, for instance.)

So the strategy for overcoming bias has to do with hearing both sides.

Compare equal and opposite biases.

Study the conservative and liberal sources in their brightest expressions. Twitter, Facebook are echo chambers. You can’t get the other side there.

Look at red and white together, not pink. “[A clear thinker] has kept [contradictions] side by side like two strong colours, red and white, like the red and white upon the shield of St. George. It has always had a healthy hatred of pink. It hates that combination of two colours which is the feeble expedient of the philosophers.”(Chesterton, Orthodoxy)

And reflect on your own selection, framing, and spin. What is noteworthy to you? What would you have put in, left out? What do you really want to know?

Some news outlets are right-wing, others left-wing. Some are popular or lowbrow, others are more intellectual or high brow. See here for a graph graph

So, read all four.

You could also read the mostly-centrist sources: Google News, Yahoo News. But only to check out what is missing from the left-right sources.

I know, I know, [Breitbart/HuffPo] is just a [conservative/liberal] rag that propogates its own bias, and its so [right-wing/leftist] that it’s not worth considering their argument. That’s the point. Get

So, how do you read the news?